Get lost in Lisbon's oldest neighbourhood with this Alfama tour. The only neighbourhood to survive the great earthquake in 1755 retains the essence of the capital, and is the birthplace of fado music. 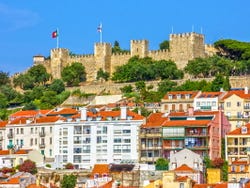 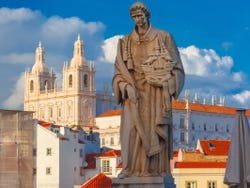 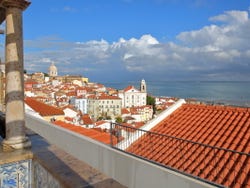 From the central Commerce Square, we begin our tour of Lisbon's oldest and most authentic neighbourhood: Alfama. The steep streets, flaking facades, and old stairs preserve an intact image of the old capital. During our guided tour we will divulge all the details of the devastating earthquake of 1755, while we walk through the streets of the only district to survive that disaster.

Wandering through the area we arrive at the San Jorge castle - a fortress initially built by the Moors and completed by the Christians following the reconquest it is a symbol of the integration of the two cultures in the city. The tour passes alongside the Lisbon Cathedral, the Church of Santo António and the statue of San Vicente, patron saint of Lisboa. As we pass through Alfama the tour uncovers the origins of fado and the importance of this neighbourhood to the traditional music of Portugal: diving into the hidden corners which have inspired the most melancholic of fados.

The last stop will be the Santa Lucia viewpoint, from where we will enjoy panoramic views of the entire neighbourhood as well as the Tajo. This beautiful balcony with its romantic atmosphere offers unique views of the San Esteban Monastery, the white towers of San Miguel and the Santa Engracia Dome. From this privileged position, you can listen to the legend of Lisbon's seven hills, before the tour ends.

All of our providers comply with local legislation and applicable health recommendations to avoid the spread of Covid-19.

You can book up until 36 hours before the activity as long as there are still places. Book now to guarantee your spot.

Free! Free cancellation up to 6 hours before the activity starts. If you cancel under this time or do not show up, you will not be refunded.

These are genuine reviews written by our customers.

I travelled by myself
Show all the reviews
like

9.50 / 10 16,390 reviews
Explore the Portuguese capital, and immerse yourself in the past and the present of the city of Fado with this free tour of Lisbon.
Free!
Book
like

9.40 / 10 1,943 reviews
Immerse yourself in the history, culture and tradition of Lisbon on this free walking tour of the Portuguese capital's oldest district: Alfama.
Free!
Book
like