The bridge was inaugurated for the 1988 Lisbon World Exposition, and is so long that on cloudy days, it is impossible to see the other side of the bridge!

Opened to the public on 29 March 1988, it was named after the most important Portuguese discoverer; Vasco da Gama. It commemorates the fifth centenary of his arrival from India in 1498. Gama was the first European to reach India by sea, from the Atlantic Ocean.

A bridge connecting the north and south of the country already existed, the 25 de Abril Bridge, but it wasn’t enough for the traffic congestion from one side to the other, so as an alternative, they constructed the Vasco da Gama Bridge.

3,300 workers were needed to build the bridge and it took 18 months to complete. 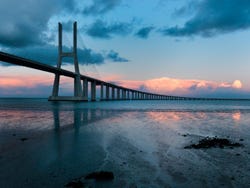 South of Park of the Nations.