Unlike in Spain, meal times in Portugal are similar to those in Northern European, including the United Kingdom. Lunch (almoço in Portuguese) is served around 1 pm and dinner (jantar) is around 8 pm. Many restaurants in Lisbon close quite early, so we recommend not going too late.

Portuguese dishes you need to try

Portugal has a varied gastronomy with typical dishes with numerous types of vegetables, meat and fish. The following list includes the country’s most famous dishes:

Some of the most delicious desserts include “drunken pears in wine”, “pastéis de Belém”, custard type of pastries, "pão de ló", a type of sponge cake, "ovos moles de Aveiro", sweets made of egg yolk and sugar and the "pastel de feijão", a cake made of almond.

Careful with the aperitifs

A long-held custom in restaurants is to put aperitifs on the table, which, unlike in other countries, are not complimentary, and if you drink them you have to pay for them. If you don’t want them them, we recommend you ask the waiter to take them away.

Best areas to eat in Lisbon

One of the liveliest areas, with the greatest number of restaurants, is Rossio Square. In its surrounding streets, you can find restaurants of all sorts. 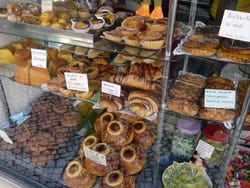 A bakery in Lisbon 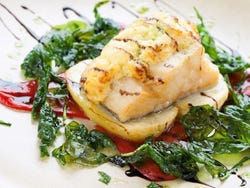 Cod in Lisbon
2See photo gallery
Shopping Where to Stay