The Santa Justa Lift is an elevator in Lisbon and is the fastest way to get from the Baixa neighbourhood to the Bairro Alto district.

It was inaugurated as one of the city’s public transport systems on 10 July 1902 and was called Elevador do Carmo (Carmo Lift). Lisbon’s inhabitants were so excited to try this novelty that on the first day, 3,000 tickets were sold.

The Lift was a huge success, as before it existed, it was very difficult to travel from upper to lower Lisbon and vice versa.

The Carmo Lift was originally powered by steam until the 6 November 1907, when an electric motor was put in place.

The Santa Justa Lift as a tourist attraction

The Elevador de Santa Justa stands 147 Ft (45m) tall and the structure is built in the same style as the renowned French architect, Eiffel. The similarity between his designs and this Elevator is not accidental, as it was built by Raoul Mesnier de Ponsard, who was an admirer of Gustave Eiffel and applied the same techniques used in some of the funiculars in France of the time.

The Lift has a stunning observation deck at the top and offers magnificent views over Baixa. Since it was opened to the public, it has become one of the most popular viewpoints in Lisbon.

Curiously, this lift can carry 20 people upwards, but can only take 15 people down. Nevertheless, when it was first inaugurated, it held up to 24 people. 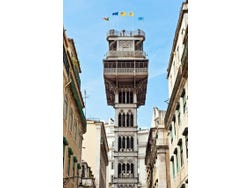