Chiado is an elegant and bohemian neighborhood in Lisbon, between Bairro Alto and Baixa Pombalina. It's frequently compared to Paris’ Montmartre district, rebuilt after it was destroyed by a fire in 1988. The most famous streets are Rua do Carmo, which houses the ruins of a church by the same name, and Rua Garrett, in the center of Chiado. The square and its surrounding streets are full of famous cafés, theatres, and museums.

Bairro Alto, which is adjacent to Chiado, is rather alternative and is probably the best part of the city to find good fado restaurants. The streets are full of graffiti and laundry hanging outdoors. We suggest you take Rua da Misericordia to get to the Bairro Alto.

The Praça Luís de Camões, where the Carnation Revolution took place, marks the border between Chiado and Bairro Alto.

Getting to Chiado and Bairro Alto

The easiest way to get to these neighborhoods is to take tram nº 28 and the Santa Just Lift or the Ascensor da Glória, located in Praça dos Restauradores.

If you take the Santa Justa Lift, you’ll see the four blocks of houses that were burnt down on 25 August 1988.

Chiado’s most famous café is called A Brasileira, where the poet Fernando Pessoa used to go, and up on its roof terrace, there is even a bronze statue of the poet sitting at one of the tables. This café is very popular among tourists.

From the Miradouro de São Pedro de Alcántara (viewpoint), you’ll enjoy wonderful views of Baixa, the Tagus River, and the hill with São Jorge Castle on the summit. 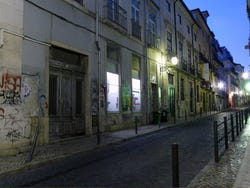 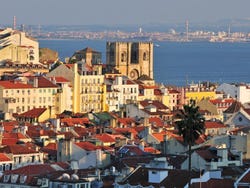 On the west side of the Baixa district. 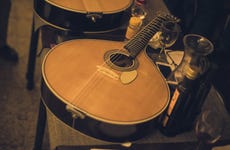